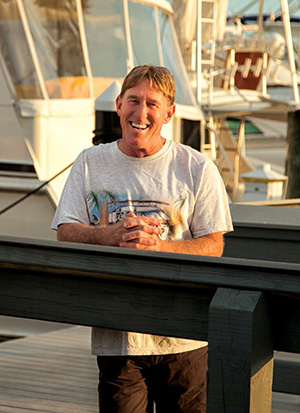 David’s Custom Trimmers have been at the forefront of excellence in marine trimming since 1979.

Our passion for custom marine trimming has won us many national and international awards. We practise the very highest standards, using innovation and a constant search for improvement to maintain our place at the leading edge of marine trimming excellence. In nearly forty years we have designed and built a vast number of marine trimming projects from dodgers to upholstery and satisfied  the needs of countless customers.

David Elliott’s involvement with marine trimming started in 1978 with the commencement of his apprenticeship at age 16. While studying Coach and Motor Body Trimming, he received honours three years in a row. So impressed was the school with his skill and enthusiasm, his head teacher offered David some of his own customers; members of the Mercedes Benz, Jaguar and BMW car clubs. His instructor announced David’s work: “The best I have seen in twenty years as a teacher.”

By his third year, he was running the workshop and one week out of his apprenticeship, started his own business. Now, David’s Custom Trimmers sets the bench mark for marine trimming excellence in Australia. As a measure of his success, the waiting time for work by David’s team has been a minimum of three months for the last ten years.

David believes marine covers, particularly dodgers, should look like they are part of the original design, and wherever possible, improve the look of the boat. David says. “If I’ve done my job properly you will see the whole boat as a finished project, with covers and canvas work not looking like add-ons, but as part of original design of the boat.”

The key principles that underpin our business and work ethic are:

“The goal is always perfection and it does take longer to produce perfection. One of the first things I say to my employees is to slow down. I don’t want things rushed. I want them done properly—once. One of my mother’s classic philosophies was: Speed will come with time. I stay involved in every aspect of design and production. When I’m not working on the bench, I’m walking between every job and looking at every detail and asking the staff to spread the job out on the bench so we can take a look at it. I’m constantly analysing the work to make sure that what leaves this workshop is of the highest standard possible.”

As a sign of David’s never ending search for improvement, he has been known to seek out bad weather to watch how different fabrics and structures perform. His covers have always outperformed the competitors and severe storms have became a great source of business as boat owners chose to replace other fabricators failed covers with his. “My goal was (and is) to be one of the best at what I do, so I look at products manufactured by others, analyse them and find better ways of producing them. In particular, I look at the failure points and step by step try to eliminate them.” David believes that the more control you have over the various components used to produce an end product, the better that product will be. For example, the workshop builds all of its own frames. “If you can’t get the frame right, you can’t get the cover right.”

David’s Custom Trimmers employs three highly skilled, full time tradesmen with his wife Andrea running the office. David finds three trimmers the limit, if the team is to maintain the level of quality he demands and his customers have come to expect.

David is also keen to share his expertise with other trimmers by running workshops and acting as a mentor to others. David’s team have presented three years of successful workshops under the auspices of the Specialised textiles Association. Numbers are always capped due to the high demand from other fabricators and suppliers. “Some people question my sharing knowledge with competing tradesmen but I say that we should work together to raise standards across the industry. Let’s compete on quality, not price. Our constant search for innovation and improvement means we stay ahead which allows us to share what we learn.”

If you want the very best for your vessel, contact us now to discover how we can help you.